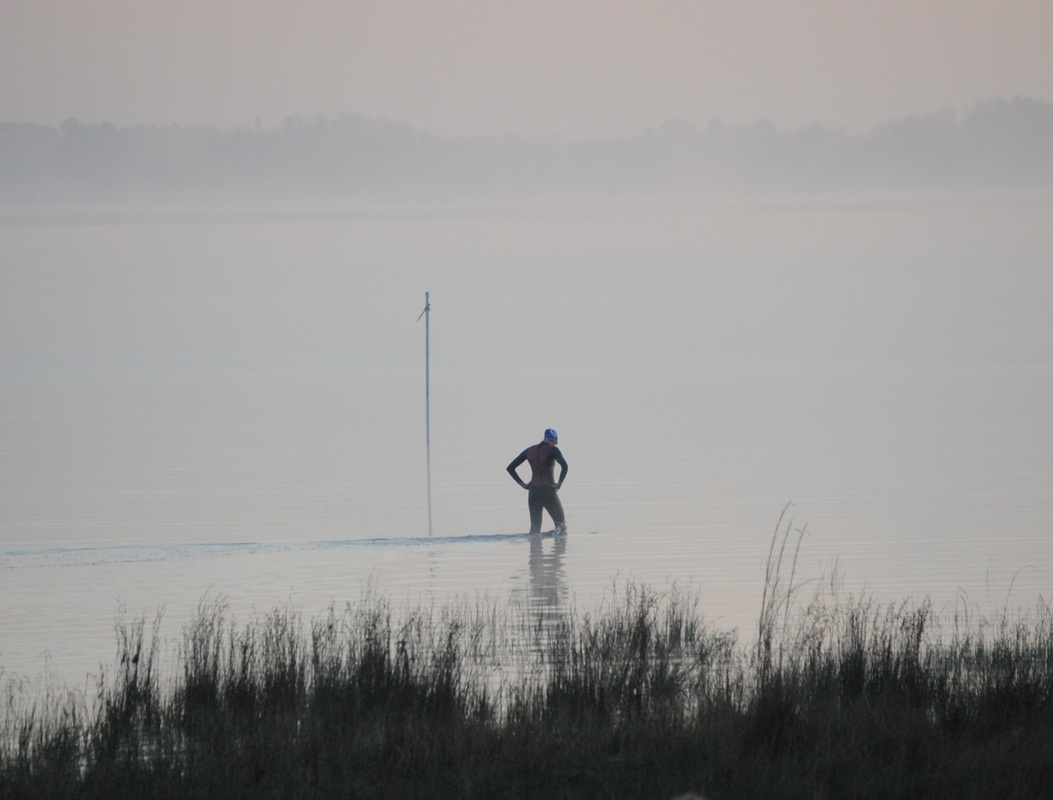 It has been awhile since my last post and a ton has happened since then! Before diving into some quick race recaps, let me give some context to these events. A big highlight of recent weeks is when I earned my elite triathlon license in the Clermont Draft Legal EDR races on March 1st and 2nd, and then racing in the Sarasota PATCO Mixed Relay Championships on March 9th.   Earning my elite triathlon license, or pro card, enables me to compete in the professional wave of any triathlon, and more importantly for me and my goals in the sport, in ITU draft legal triathlons. To clarify, this does not guarantee that I will win prize money, be accepted to any race I want to enter, or secure sponsorships, but it is the first step. Here’s how it played out:

The day started out as a foggy morning with 67 degree water (wetsuits are allowed below 68 degrees). Despite not taking a very good line into shore (read: I basically ended up swimming in the middle of the lake instead of taking the most direct route to the swim exit) I lead out of the water ahead of several former Olympic Trials swimming qualifiers, and I had a few seconds heading into the bike. In draft legal racing, athletes are allowed to draft (ride closely) to one another on the bike, which can reduce energy expenditures by 30-40%. Athletes rotate through a pack so theoretically everyone is doing work. On the first half of the first of four loops of the bike course, I and another athlete began to work together taking pulls at the front before we were joined on the second loop by another athlete. Coming through the transition area, I got dropped on the corners and ended up riding by myself the last two laps, as the second group didn’t catch up to me. I came into T2 about 25-30 seconds down on the first two girls, who I managed to overtake before the midway point on the first lap of the run. I was relieved to come into the finishing chute knowing that although I have lots of work left to do on the bike, my hard work is starting to pay off and I am headed in the right direction.

With a later start time, the swim ended up not being wetsuit legal. The race was shaken up a bit from the day before with the addition of a few elites. Once again I led out of the water and was joined on the bike by one of these girls on the first lap, and we ended up with a group of three from lap two on. I still lost some ground around the corners on Sunday’s race, but I did a better job of catching back up to and staying with the group. I managed to run even faster than the day before on trashed legs to take the win. I came away from the weekend feeling really encouraged.

The Week Between – AAA Tri Camp

In the days following the Clermont races, several members of my training group along with a few other Collegiate Recruitment Program athletes had the opportunity to participate in a heavily cycling focused camp at AAA tri camp near Orlando. Since biking is still new to me I feel really fortunate that I had the opportunity to take a few days and practice some new and old skills with a few different sets of eyes and around new friends. A few sessions included games and basically playing on the bike! I am proud to say that I can now play catch while riding my bike AND do bunny hops. I’m hoping to go back to Scottsdale and impress the little kids who live in our neighborhood with my new tricks!

After the AAA camp, the crew headed down to Sarasota, braving crazy downpours and tornado/waterspout warnings. The weekend was set up where the individual Pan American Cup races were on Saturday and the Pan American Mixed Relay Championships were on Sunday. Although I am now eligible to compete in the individual races, we had never really discussed me racing it and had just decided to focus on the relay. Mixed Team Relays are set up as Female/Male/Female/Male, and each member of the team does a super sprint triathlon, (350m swim, 6.4k bike, 2k run).

I ended up leading off a pretty cool team made up of the American Record holder in the mile Alan Webb (in his triathlon debut), reigning World Junior Triathlon Champion Tamara Gorman, and former World Junior Triathlon Champion Lukas Verzbicas, who also has quite a bit of running cred. I was so nervous to lead off a group of people who had accomplished so much cool stuff that I thought I was going to throw up before the race! The morning was chilly and foggy with water slightly below the wetsuit threshold. After going back and forth with my coaches for awhile, we decided that I would go non-wetsuit. In general, it is faster to wear a wetsuit, but since the swim was so short we decided that the time it would take to remove the wetsuit in transition would probably negate the gains I would get from it. I ended up being one of the only women in the first group to skip the wetsuit. This swim ended up being my first open water swim with a large number of strong swimmers. I got jammed up going into the first buoy, but managed to work my way to the front of the group and came out of the water with the leaders. Since I didn’t wear a wetsuit I was able to get out of T1 first and thought I was in a pretty good position… until I got to the first turn out of the parking lot configuration after transition, headed onto the road, and missed the front group of two girls as they rode by. I ended up time trialing the entire bike until the second group caught me at the very end. Definitely not going to make that mistake again! I managed to get back into 3rd place before handing off. Alan had a solid start to his triathlon career and kept the relay going strong. Tamara had the fastest split of the females in the third group. Lukas made up a lot of ground on the fourth place team, but it wasn’t quite enough to overtake them.  I had a lot of fun on the relay and felt honored to be placed on a team with notable athletes who I look forward to seeing at future races.

Since I’m still new to the sport and entering races is dependent on points and rankings and such, my schedule is still largely up in the air. I do know that my next race is FISU World University Games in Brasilia, Brazil on April 20. I’ve never raced internationally and I’ve never been to South America so I couldn’t be more excited! I wouldn’t have these opportunities without the support of my family and friends, USA Triathlon’s Collegiate Recruitment Program, and my partnership with Team Psycho.  Time to get back to work, literally!!!