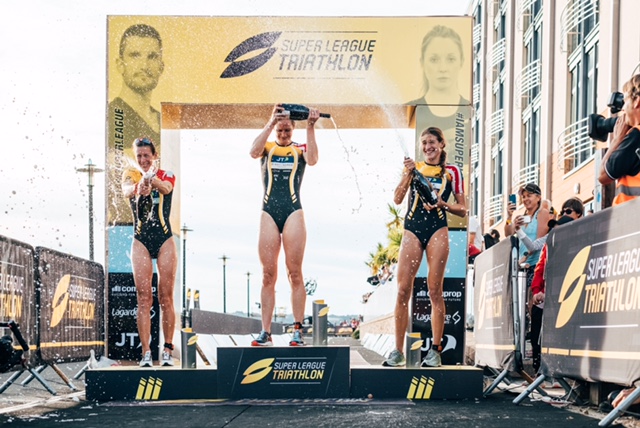 I did similar posts for the 2014, 2015 , and 2016 seasons, and it’s time for another edition. Its quite entertaining for me to look back on the year and reflect on some of my favorite parts and also laugh at some of the absurd things that happened. I see it as a way to tell some stories from the season that I wouldn’t otherwise get the opportunity to do. Just a little bit late (sorry, writer’s block is real, even for blogs), here is the 2017 edition of my superlatives: 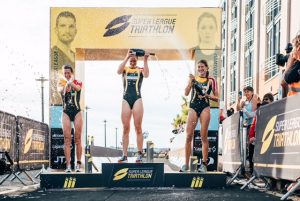 Best moment – Finishing second at Super League Jersey. I had no idea where I would stack up, given the caliber of the field, the format, and various conditions. I was so proud to put together a strong performance and prove that I belong competing against many of the top women in the sport!

Most Absurd Travel Moment – The travel day home from Yucatan World Cup brought an early wake up call but an otherwise smooth first few hours of travel. Once I boarded my second and final flight home and thought everything was good to go until the cabin crew got on the intercom and announced that fuel was spilling out of our aircraft and we needed to evacuate the plane. As people started to stand up and collect their belongings, another airline agent came on the intercom and announced that we, in fact, did not need to evacuate while airport staff cleaned up the fuel spill. While I didn’t particularly want to remain on board an aircraft with fuel spilling out of it (in 110 degree heat), I also figured that because of liability reasons there was no way they would risk keeping us on board the plane if we were in any danger. We were able to take off about an hour later and all would have been fine if the woman in the row in front of me hadn’t kept turning around and panicking to her travel companion seated in my row about how we were all going to die. Spoiler alert: we didn’t. 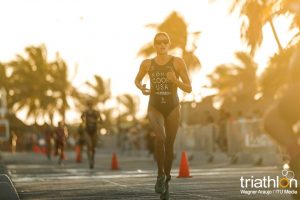 Running without one of the adorable puppies

Most absurd non-travel moment – When getting ready to swim warm up for Yucatan World Cup I noticed a man holding some adorable bull terrier (aka aardvark dog) puppies. As per personal principle, I smiled and waved at one of the puppies. Much to my surprise, the man holding them asked if I wanted to buy one of the puppies. Besides the absurdity of impulse buying a puppy, I was walking around on the beach in my race suit (that clearly identified me as a foreigner) about to compete in a race that started in under 30 minutes! Considering that none of this was taken into account I’m seriously concerned about the homes that those puppies ended up in.

Favorite new destination – Jersey! I didn’t know much about old Jersey until the race was announced, but I completely fell in love with the little island! The race brought out huge crowds of some of the friendliest people I’ve ever met. The landscape is also idyllic, with rolling green hills and beautiful views of the sea.

Favorite training sessions – Every time I ran with my boyfriend, Ian, and our dog, Kona. One of the staples on my 2017 training schedule was grass runs, and as fate would have it, Kona is happiest while running on grass. While I almost never held her leash (she is a  strong 60 lbs!), I loved watching her enthusiasm while we ran. It also served as a reminder of the simplicity of the joys of running!

Most ridiculous training session – While training in Banyoles, a cycling paradise, we took advantage of the cycling friendly community and were actually able to commit to practicing descending without worrying about the aggressive driver dangers we deal with in the US. I was working with my coach on one particular descent one afternoon. As my coach headed off to his next task he told me to keep working on the downhill for awhile longer unless the impending storm rolled in. When I got to the top of the hill to start my next rep, it hadn’t started raining yet but the sky had gotten really dark and I had a bad feeling about being out there. I turned to go home and it started pouring less than a minute later. Less than ten minutes later I found myself hiding under a mildly flooding highway underpass from the thunderstorm waiting for my coach to come rescue me. The joys of trying to fit training around 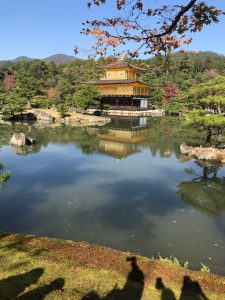 Kinkaku-ji (The Golden Temple) in Kyoto

Best Adventure – Visiting Kyoto and Osaka following Miyazaki World Cup. Even though the trip wasn’t triathlon related per se, it wouldn’t have been possible had my last race of the season not been in Japan. My training partner, Yuko, and her sister, Keiko, joined me for most of the trip and helped me experience Japan in a way that would not have been possible without them. Kyoto, my new favorite city, was the imperial capital of Japan for over 1,000 years. I loved taking in the history and learning more about Japan! I found Osaka to be a little overwhelming (the metro area is home to 19 million (!) people), but I still enjoyed my time there. Osaka is a culinary capital of Japan, and I had the opportunity to try lots of new foods, some which I didn’t even know existed! I’m so happy that I took advantage of the opportunity to stay longer in Japan and see parts of the country other than where I race.

Thanks to my family, Ian, Paulo + The Triathlon Squad, my friends, USA Triathlon, fortynine Group, ROKA Sports, Team Psycho, and the New York Athletic Club for all your support in 2017! I couldn’t do it without you all! Bring on bigger and better things in 2018!