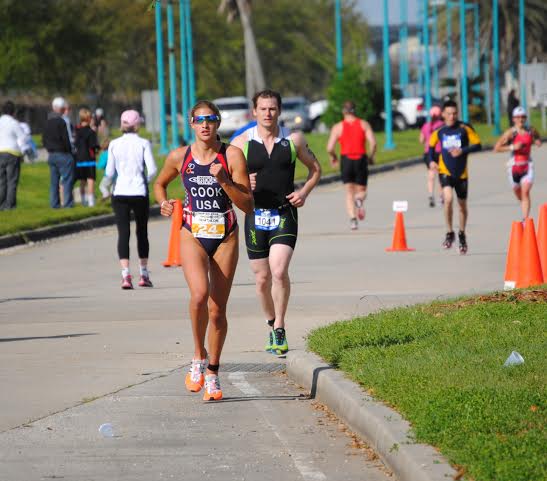 The best way to learn is from experience, which is why we decided to add a non-draft race in New Orleans to my schedule two and a half weeks before the race. We put clip-on aerobars on my road bike, and I packed up my bags and headed to the Big Easy to make both my professional and my Olympic Distance triathlon debuts. I picked up my one woman on-site support crew for the race – my mom – on a layover in Denver, and we embarked on a journey to both explore New Orleans and broaden my triathlon horizons together.

After a few rattlesnake sightings and dust storms accompanied with strong winds known as haboobs, I was excited to get a change of scenery for a few days. As it turned out, my enthusiasm was unwarranted, as we were met in New Orleans with more wind – only there the wind blew rain instead of dirt. My mom and I had planned to take Friday morning to explore the city, but unfortunately we didn’t get as much in as we had hoped due to pouring rain that caused flash flooding. That storm left a lot of water and debris on the bike and run courses, which race volunteers spent Saturday cleaning up. I was pretty shocked to watch the water coming over the seawalls in Lake Pontchartrain (a tidal estuary that connects to the Gulf of Mexico – not an actual lake) as a result of the little storm I experienced, and I can’t imagine what a major storm must be like there.

Race day was sunny, albeit cool and still very windy. I was really happy that I borrowed a neoprene bonnet swim cap that covered my ears from my awesome roommate Josh before heading down to New Orleans. Even with added warmth from the cap, the 61-62 degree water, air temperature in the low 50s, and strong winds made for a chilly race. I had a strong swim in the cold, choppy water and came out of the water on the leader’s heels. The swim exit was up a set of stairs that I had a tough time navigating, as there wasn’t really enough room for more than one athlete and a volunteer on the stairs at a time. The steps were hard to find in my state of post hard swimming-trying to transition to being on land induced confusion.

The bike course managed to prove that contrary to popular belief, New Orleans is not entirely flat. It turns out that the roads next to Lake Pontchartrain include several bridges, which are all semi-long and steep, as boats must be able to pass underneath them. Although I knew this from course recon, there is a big difference between cruising easy up the hills in decent conditions pre-race and trying to ride hard up them into a headwind and feeling as though you are being blown backwards. I hadn’t adequately prepared myself to bike in such conditions, especially on the aerobars, and as a result my bike leg suffered. I lost a ton of time on the bike, but passed several of the women on the run who had seemingly zoomed past me on the bike. I was really pleased with my run, and ended up finishing seventh. Although my end result was not what I had hoped for, it is clear that minor improvements on the bike and more time biking will make a huge difference in my ability to be competitive in professional triathlon.