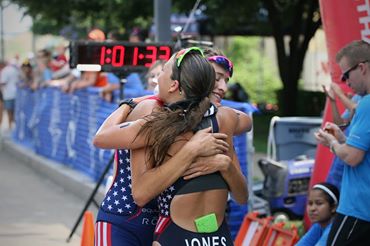 I had gone back and forth about racing Dallas for a bit. On one hand, I raced poorly enough in Dallas last year that I had no desire to ever return again. On the other hand, there aren’t too many races this time of year. Opportunities are limited and I wanted to get a race in. The desire to race won out and I prepared myself to fight for redemption. But then, the day before departing for Dallas, we learned that the swim would be cancelled due to a sewage leak stemming from flooding earlier in the week. The race format was changed to a 5km run-20km bike- 2.5 km run duathlon format. Since swimming is my strength, I wasn’t too happy about this change, but I also didn’t really want to swim in a totally toxic lake. After all, I was going to Dallas because I like to race and there was still going to be a race.

This was my first duathlon and didn’t know what to expect. Waiting to line up felt a little bit like waiting to start a track race, except less tense. I think triathletes are way less tense before the start of races than swimmers or runners pretty much all the time, but starting out with a run instead of a physical swim seemed to make everyone even more chill in the holding area than usual. This was great for me because I’ve found that I focus better during the race when I’m not laser focused before the gun. It really makes the whole experience of racing so much more enjoyable anyway. We lined up to start the race in mass start style underneath the arch at the finish line. I got out really well and led much of the first run, running hard enough to string things out, but still conservatively because it was going to be an intense leg day.

On the bike my Triathlon Squad training partner and roommate Erin Jones and I found ourselves up front on the bike early. We pushed the pace hard and the two of us put nearly a two minute gap on the chase pack! I’m especially proud of this bike performance for a couple of reasons. Last year in Dallas I biked terribly and got dropped from two packs, so this really demonstrates my progression over the last year. Dallas is probably the least technical ITU bike course in existence – the only turns are two wide 180 degree turns at either end of a straightaway and you are always aware of your position relative to other bike packs. In other words, the course is pretty much designed for groups to come together. Erin and I worked really well (and hard!) together to open up that gap. Crushing it with your training partner is a lot of fun- Triathlon Squad represent! My second run was pretty rough, but I finished second behind Erin and the women’s podium was all USA, as Calah Schlabach finished third.

Dallas is home to both my best and worst career bikes to date. It’s nice to replace the bad memories of a place with good ones. I’ve grown a lot as an athlete and as a person in the last year. I’m happy with where I’m at in the process right now but looking forward to continuing to progress. Thank you to my family and friends, Paulo and my Triathlon Squad training partners, Equal Earth, OTF Multisport, Team Psycho, USA Triathlon, and Roka Sports for your support. I’m proud to represent you on podium and look forward to continuing to do so in the future.

Thanks to Mary Huffman, Talbot Cox, and Calah Schlabach for posting these photos from the race. I always love looking through race photos and I always appreciate it when people post them!

Also, check out this great interview with Andrew Duggan of Equal Earth. The Duggans and Equal Earth are big supporters of both The Triathlon Squad and myself. I’m grateful for all they do and love what they are about!