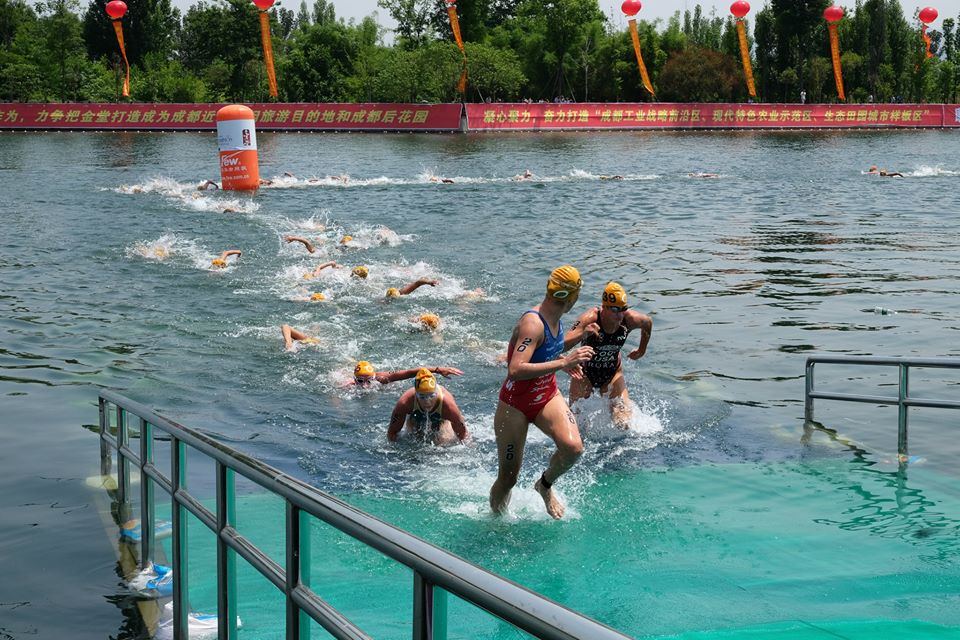 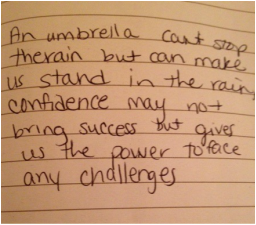 I saw this quote shortly after my accident and I decided to write it down. I think its a pretty accurate metaphor and my recent experiences proved it. Anyway, after somehow making it through a challenging couple of weeks I got onto a plane to Asia feeling relatively confident and excited to race.

I was actually a little terrified of the swim. Even though my swims had been fine, I hadn’t been in the water much and was standing on the start line with some very good swimmers. I wasn’t terrified of swimming poorly– I was afraid of not having enough start speed and getting pummeled. The beginning of the race definitely didn’t show my typical start speed, but I held my own and started to feel more like my usual self as the swim progressed. I took over the lead at the start of the second lap and led a group of 18 out of the water and onto the bike.

While I had one of my better race bikes to date, I wouldn’t say that I executed as well as I know I am capable of doing. I hadn’t done much riding in a group since my accident and I was jumpy and hyperaware. I actually liked the bike course – each lap contained three short and steep back to back hills that felt like a mini roller coaster, and the roads were pretty wide and well maintained. In the last few km of the bike the massive chase pack caught us and we headed into transition as a group of about 60! I think this was the first time that I wasn’t the last person in the group off of my bike into transition, but I was still well towards the back of the pack. It wasn’t ideal, but it was actually a pretty big step for me to not dismount my bike alone off the back – next step: be closer to the front!

It was very hot and humid by the time we hit the run and with such a large group coming out of transition together the first few aid stations were chaos. I quickly moved towards the front and settled in with the second group while two girls ran together up front. On the third lap USAT teammate (and eventual race winner!) Renee Tomlin bridged up to the front runners and I only managed to hang onto her surge for a few steps before going back to running my own pace. I surged at the start of the final lap to drop the group I was running with and maintained my position in fourth – my best result to date by a wide margin!

Those close to me know that I like pandas quite a bit. Chengdu happens to be home to the largest giant panda research facility in the world. Several other US athletes and I visited the Giant Panda Breeding Center the day after the race. The giant pandas were being kept inside because of the heat instead of in their typical outdoor habitat, but I absolutely loved the experience of seeing a large number of pandas doing panda things.

We also ventured out to a local restaurant that a couple of US athletes discovered last year during their extra -long Chengdu adventure.  Nobody at the restaurant spoke English, but we were able to communicate through pictures and by going back to the kitchen to point at raw foods and hoping they would transform them into something delicious and safe. I loved going to this restaurant and consider our trips there to be one of the highlights of our China adventure.

Yokohama was my first WTS race and my first wet race. It was not a great combination of firsts. I had a solid swim through the chop – I felt like I was drowning at times, but I got out well and led out of the water. I was nervous about swimming off course in poor sighting conditions, but my ROKA SPCTRM goggles helped brighten my surroundings and kept me on course. After the swim I stopped racing well. It took me two tries to mount my bike and I got really frazzled as a result. I got on my bike to discover that my front brake was rubbing. I had checked my brakes that morning so I’m not entirely sure what happened. I opened my brake on the second lap, which might have actually made things worse for me as I was even more terrified going into the corners than I had been before. I yo-yo’d on and off the front pack for three laps, got dropped, had the chase pack ride through me, rode solo for three laps, then yo-yo’d on and off of the second chase pack for the last three laps. This turned out to not be the most conducive way to prep for a good run, as I got into T2 on dead legs and slogged out 10km which might have been faster had I walked instead. I was optimistic heading into the race, but I knew that the learning curve for the WTS level could be very steep and it was. I’m confident that I can master it in the near future and am grateful to have had this opportunity.

I tend to develop a personal vendetta against places where I race poorly (i.e. the entire city of Dallas, Texas). However, this is not the case with Yokohama. I absolutely loved it there and I want to go back every year as long as it is a race and I am racing ITU. I plan to return next year with the skill, strength, speed, savvy, and experience to have the world class performance I know I am capable of regardless of the conditions.

Apart from the race, Yokohama was a great trip! I got to try real sushi and admire one of the world’s largest ferris wheels. I was impressed by how clean and orderly Japan is, as well as by the friendliness of the people! I became a little obsessed with Japan on this trip!

Between the tough lead up to the races and training/racing in such a foreign environment, I returned to the states feeling pretty drained. I managed my situation well for the first race but I lost some focus for the second race against competition whom you can’t lose focus for a second against. Overall I would say my trip was a success and an overwhelmingly positive experience. Chengdu was by far my best execution and performance to date. I put more focus into the small details during my recovery period than at any other point in my athletic career. It was nice to see my efforts pay off with a great result. I’ve never been more proud of the work I did during this period and plan to apply the same levels of diligence, effort, and resilience moving forward. Yokohama was a good learning experience and I now have a better idea of the work I need to put in to meet the international standard.

For now, I’m avoiding rice religiously until my next trip to Asia, while throwing myself back into training in preparation for the Dallas American Cup in a few weeks. Some big thank you’s go out to those who helped me get to the start line after some really difficult times and support me on the good days and the bad days: my family and friends, Paulo + my Triathlon Squad training partners, Equal Earth, OTF Multisport, Team Psycho, USA Triathlon, and Roka Sports.