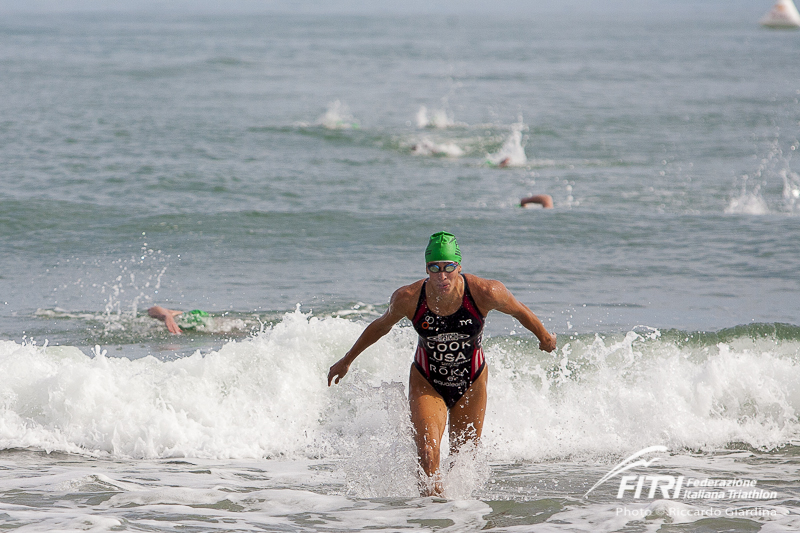 ​Alanya is a place of firsts for me! Last year, Alanya was home to my first World Cup. This year, home to my first World Cup podium! The day I left for Turkey, over 100 people were killed in a bombing at a peace rally in the capital city of Ankara. Though Ankara is not near Alanya (300+ miles) and I knew that I would not be in danger, I was admittedly nervous to board the plane for Turkey. I got into Alanya plenty early to acclimate and recover from the long travel, but I was still spending hours awake from the jetlag in the middle of the night until two nights before the race.

I was dead last off the start line and worst of all there is video and photographic evidence to prove it. I kept my head together, swam hard, and was first to the first buoy. Yay for avoiding the fighting! I maintained my position in the front comfortably and lead a group of four out onto the bike. Our lead was shut down quickly and a large group formed. I focused on staying hydrated in the warm conditions and setting myself up to run fast. While the bike course in Alanya is pancake flat, the run goes up a short, steep hill with a long, gradual downhill on each of the four laps. I performed well on hilly courses in cross country back in my Villanova days, but I haven’t really had many chances to race a hilly run course in triathlon yet. I bridged up to the front of the group at the top of the hill on lap one and settled into second. I focused on running my race and staying in control and it paid off. I was excited to run down the blue carpet to the finish line knowing that I was going to finish on the podium! Congrats to the other podium finishers – Yuliya Yelistratova (Ukraine) and Miriam Casillas Garcia (Spain).

I was ecstatic to earn my place on a world cup podium, yet I want that top step very badly! I know what work I need to do to make that happen – and the steps I need to make to progress to the podium at the next level up. I’ve got my work cut out for me, but that’s a task for the winter!

​I had originally planned to close out my season in Alanya until I noticed on the ITU events page that there was a race in Catania, Italy, located on the island of Sicily, the week after Alanya. I wanted to have an adventure, race some different people, and embrace some new challenges so I decided to go for it. Though training in Catania was a bit difficult with heavy traffic and some roads that hadn’t been well maintained, it quickly became one of my favorite places that I’ve visited. The architecture and atmosphere of the city were amazing. Everyone was so friendly and welcoming despite the language barrier. Groceries are bought fresh from daily street markets and the food is to die for. Sicily (and the Italian mainland) is at the top of places that I want to visit and really get to see someday on a holiday setting!

There were a few changes to the race due to the condition of one of the roads that was supposed to be part of the bike course.  Following the swim, we had a T1 where we dropped our cap and goggles and had the option of putting on running shoes before running 400+ meters to T2. The field was split on wearing shoes.  I opted to wear shoes since the road was very rough and I was worried about cutting or injuring my feet. At T2, we dropped our shoes, put our helmets on, and took our bikes out on the road. Following the bike, we had a T3 that was the same as a typical T2. Since the run was a looped course and included extra distance because of the shift in the transition area location, it ended up being 6.3km instead of the traditional 5km for a sprint distance.

The start of the swim was very challenging. We ran off the beach into some fairly large waves. I’m pretty sure the first 100m of the swim was my slowest 100 of any race simply because of the conditions. I took control and got a bit of a gap out of the water, which helped me get through the first two transitions comfortably.  The bike course was pretty straightforward and I worked to improve upon my riding in my past races. I struggled in T3 and was last out on the run, but I ran hard to move up to the front and take control. I focused on running my own race and it paid off. There were a lot of spectators that I got to high five as I ran onto the blue carpet (an improvement from Sarasota when only my Dad wanted to high five me as I finished) and I was amped to take the win.

It is always nice to end the year on a high note. I’m currently spending my break with family in Colorado but I’m already looking forward to getting back to Poway to train for the 2016 season. A big thank you to Paulo + The Triathlon Squad, my family and friends, USA Triathlon, Off the Front Multisport, Team Psycho, Roka Sports and Equal Earth for all of your support this season. Looking forward to the future!

Thanks to: ITU Media, Federazione Italiana Triathlon for many of the above pictures