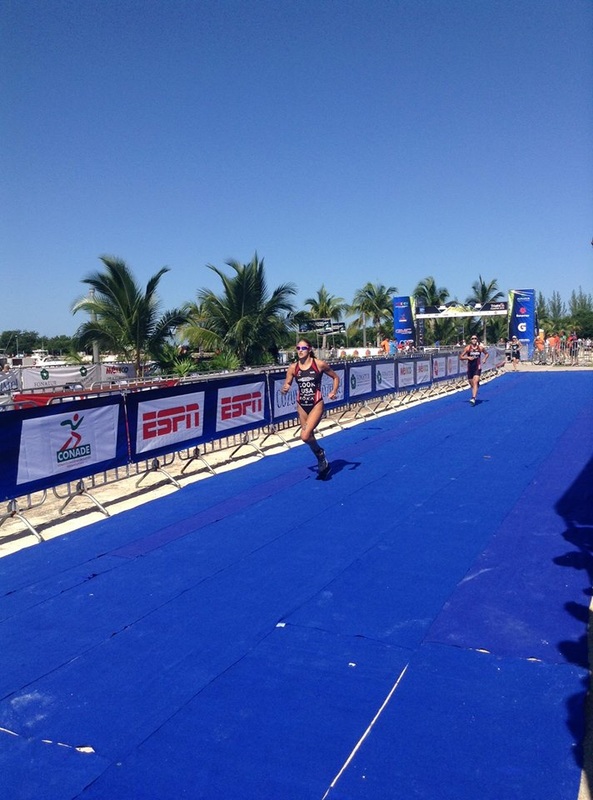 ​After a tough past few races, I was excited to have the chance to race again in Cozumel, Mexico. It was my first time in Cozumel and I could tell right away that it was something special. Watching schools of colorful fish while swimming in crystal clear water is a luxury that I wish I could experience more often. Spending my time outside of the race watching incredible sunsets off the dock and relaxing in a hammock wasn’t too bad either.

Race day brought some choppy water and a pontoon that felt similar to being on a boat. I actually felt a little seasick on the pontoon and was worried about false starting or falling in. Apparently the officials were also worried about us false starting because they deviated from the usual starting routine by not playing the soundtrack of a heartbeat once all the athletes are lined up and by firing the horn before I had time to process what was happening. It felt like I was the last person off of the pontoon and I then spent the next 2/3+ of the swim being attacked repeatedly by the same athlete. I’m surprised that my suit didn’t tear during the swim! I ended up mid pack out of the water and a slow transition onto the bike placed me in the chase pack, which never bridged up to the front. Once off the bike I focused on passing as many people as possible and finished 10th. I’m both satisfied and frustrated with my result. On one hand I recovered from the tough swim and never gave up, which would have been easy to do when I found myself far out of the game from the gun. On the other hand, I know I’m capable of much more right now. Glad I still have time to get it right! Cozumel is hosting the Grand Final next September and I very much want to return for that!

I’m looking forward to having a few more opportunities to put together some good races this year! ​I’m closing out my season with the Alanya World Cup in Turkey on October 17th and the Catania European Cup in Italy on October 25. Thank you to everyone who continues to support me as I continue to progress: Paulo + The Triathlon Squad, my family and friends, USA Triathlon, Off the Front Multisport, Team Psycho, Roka Sports and Equal Earth.

Disclaimer: I am not in this (ITU highlights) video… but if you watch the first 15 seconds you can see how horrible the pontoon was