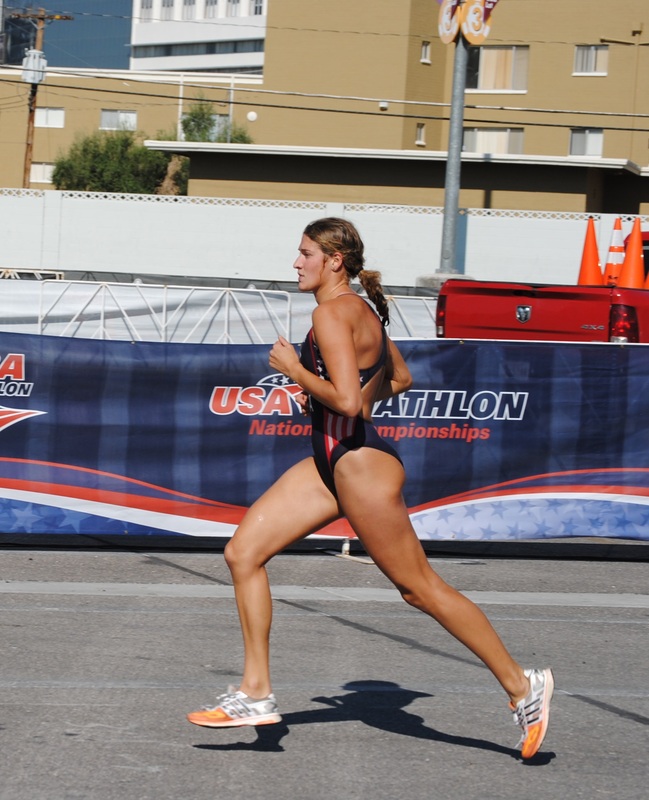 Last week, I competed in an Olympic Distance race in Monterrey, Mexico on Sunday and a pair of Super Sprint races in Las Vegas on Thursday in prelim/final format.

MONTERREY – NOT THE MEXICO YOU ARE THINKING OF

If I had to choose one word to describe Monterrey, I would choose slippery. Everything imaginable was slippery. The swim took place in 2.5 ft deep paved canal that I considered to be giant, narrow pool. Despite the depth of the canal we had a pontoon start and then 475m into the swim we ran up a ramp onto another pontoon and dove back in. Safety last. The bike and the run took place on a Formula 1 (F1) race course that had lots of paint, oil, sharp turns, and in some places, water on it. The course had been completely soaked by rain during the two days prior to the race, so race day was the first time we had seen sections of the course dry. The swim exit was carpeted, but that didn’t stop me from wiping out practicing exits prior to the race. Thankfully, I managed to stay upright during the entire race, which was a huge relief. My main focus on the swim was positioning myself to save energy since the narrow canal made for a physical swim. I dealt with the technical bike course (and the merging of the front and chase groups into the biggest pack I had ever raced in) and came off the bike still in the lead pack for the first time ever! I got anxious and dismounted my bike a tad early and as a result was last out of T2. I ran through quite a few people and at one point I was running in third before getting passed by two girls with 3km left and fell back. I ended up 5th, which was not the final result I wanted, but the breakthroughs on the bike were enough to leave me satisfied with my performance. The venue itself was cool conceptually, but I would not recommend Monterrey, Mexico as a travel destination. I’ll leave it at that and let you use your imagination.

The prelims at the Las Vegas Super Sprint were 2x (200 pool swim, 3km bike, 1km run) and 100% pure intensity and pain. After racing four days earlier I came into the race with no expectations and with the goal of having fun and practicing skills in a fast format. I was seeded in an incredibly stacked heat and was admittedly a little intimidated going in, especially since I hadn’t felt like I was coming around from my race in Monterrey until race morning. I was a little too ambitious on the first swim and approached it closer to how I would approach a straight up 200 free as opposed to a 20+ minute race. I led out of the water and as expected, lost time on the bike. I made up some ground on the run to get myself into 5th to start the second half of the circuit. The second swim was incredibly painful, which is something I had been told by athletes who had competed in similar formats previously, but didn’t really understand until I experienced it. After biking and running hard your legs just don’t work. I had a solid one-beat kick going and flopped around on my flip turns. Trying to maintain a normal breathing pattern when your heartrate is super high is pretty tough too, especially when you breathe on three for everything from the 50 to the 1650 😉 I was able to hold steady in fifth and qualify for the B final. Even though this race took less than ten minutes more than a 5km run or a 1650 free, it was a million times more difficult. You never get the chance to settle in; everything is high intensity with surges. Additionally, with five transitions refined skill under pressure is necessary, especially since your belongings aren’t precisely where you might ordinarily have them after the swim and bike.

The finals at the Las Vegas Super Sprint were 2x (300 pool swim, 5km bike, 2km run) and 110% pure intensity and pain. I came out of the first swim in third – behind super swimmers Sara McLarty and Julie Stupp, so definitely no shame in being third behind them – but still not a position that I’m used to. I got onto the first bike and just didn’t feel strong. I brought old Summer to that first bike and it showed. I set out on the run determined to hunt people down. I dove into the second swim in second place, splashed around like a beached whale, and exited the water in third place. I was much more aggressive on the second bike and started to do things better than in the first round. I brought new Summer, Monterrey Summer to the second bike and executed better. I felt as though I rebounded somewhat from my first bike. I am happy that I didn’t let myself get discouraged and I kept fighting. I held my place on the bike and set out on the run determined to move up. I ran myself into second in the final 300m and walked away from the race highly satisfied with my result. I found the super sprint format to be challenging but fun. I’d really like to race another one when my bike skills are more developed to try to keep myself in the hunt.

Next up I’m racing my first World Cup in Alanya, Turkey on the 27th of the month. I only have two more races left this season and I’m incredibly excited to have two more chances to test myself and continue to set myself up for success!