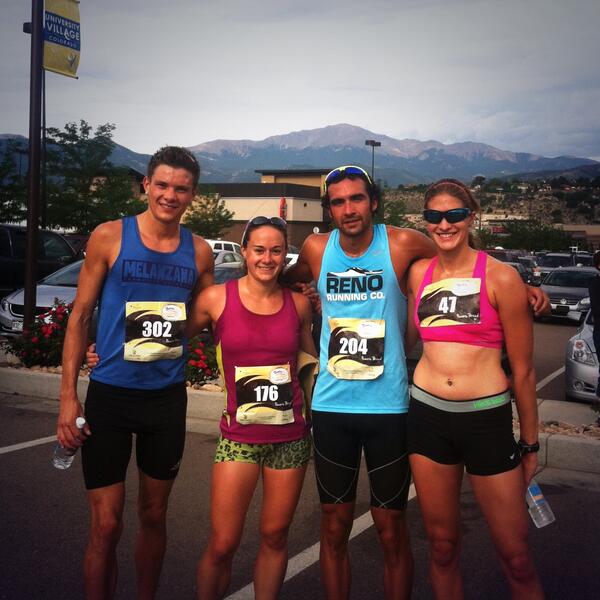 If it makes sense, life at the OTC has its routine, but there is still room for variety. The tri program I am a part of usually starts the day with time to grab a quick snack in the dining hall before our 7:30 swim in the indoor 50m pool. We follow our swim with a big (but quick) breakfast before our 10 am workout, which is either a run or a bike depending on the day. Not surprisingly I’ve gotten pretty good at being able to eat a decent amount shortly before running, a skill I didn’t think I’d ever acquire. This is an important skill to have because Olympic distance triathlons take roughly two hours to complete, and some in-race caloric intake is necessary to prevent bonking. We then grab lunch, and if we have a third aerobic workout we start it around 2. Three days a week we hit the strength and conditioning gym for an individualized strength session. Our training day is usually finished around 3:30 or 4 – in plenty of time to grab a snack and go to sports med for a massage or other recovery activities, such as Normatec.

An average training week totals between 20-25 hours and differs slightly by person. Each individual session is fairly short but these sessions are numerous and allow for development in all three sports. Every day/week is a little different as sometimes we swap our early morning swim for a session in the outdoor, 25y pool later in the day. We occasionally have some bricks thrown into the mix as well, which accomplishes three things at once: we train for two sports at the same time and get to practice transitions. Pretty much every day has at least two sessions. Some have as many as four once strength is factored in.

But don’t worry – life at the Olympic Training Center exists beyond training. We celebrate important weekly holidays in the dining hall, such as Sunday Brunch, Real Bacon Wednesday, and Hot Fudge Friday. After our typically lengthy social dinners we sometimes play games that aren’t very physically taxing, (although sometimes we do get a little competitive…) such as croquet, cornhole, pool, and giant chess. The OTC recently installed tetherball in the yard, which I imagine will get dangerous pretty quickly given how competitive every athlete here is.

Overall the OTC is an incredibly place. The training center plays host to a mix of residents and a steady stream of campers. At any given hour the complex is filled with coaches, staff, athletes who have competed in the top echelon of their sport who crave more, and athletes with big dreams who hunger to reach the top echelon.