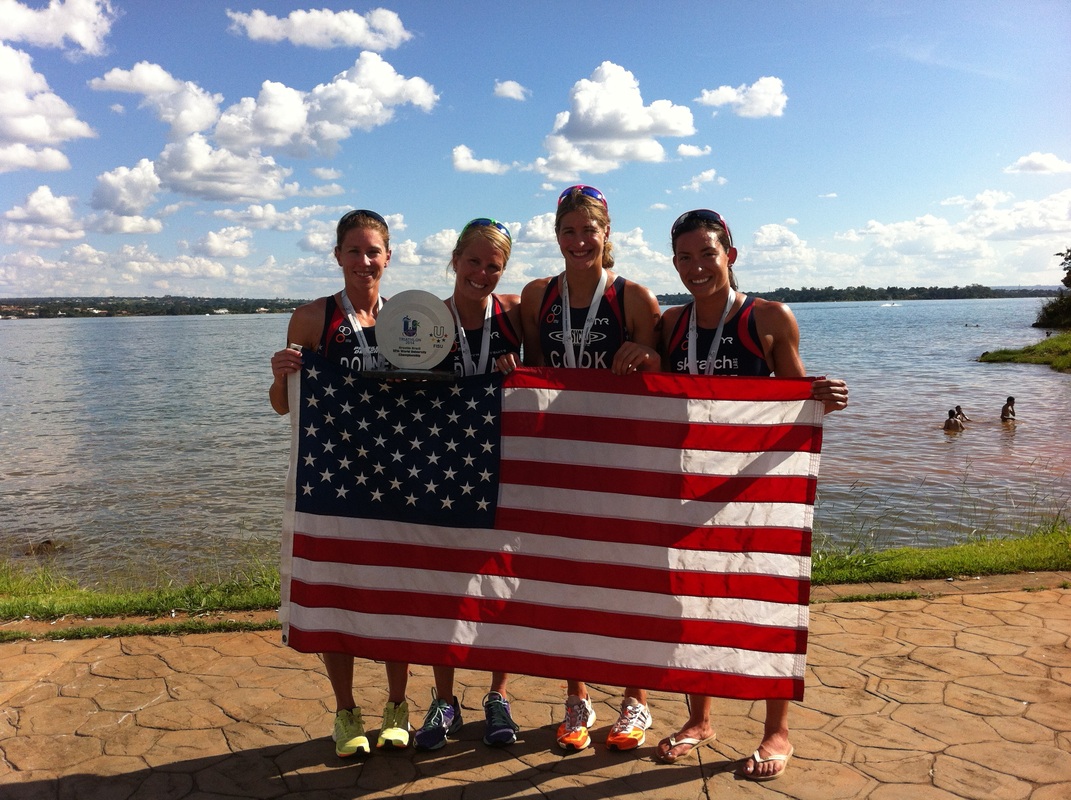 In the world of athletics, sometimes you have to give up control and go with the flow. At my race in Brasilia last weekend, we experienced three start time changes between our arrival and the race, as well as a significant change to the course the morning of the race. We’d had a venue preview via bus two days earlier, but had not done any training on the course due to the water quality of the lake, and the fact that the bike course is basically on a three-lane Brazilian highway that was not closed to traffic until race day. Despite these factors I was incredibly excited to race, as it was not only my first international competition, but there was also a team component to the race. The US women were the defending champions in the team competition, which is scored similarly to a cross country race (top 3 score points, low score wins).

The race had no shortage of tough obstacles to overcome. The 1500m swim was a rectangle in which we swam 700 meters out, then turned and swam 50m to the side. There were no sighting buoys, which made trying to figure out where to turn extremely difficult. The first 300m or so I was following another athlete until I realized she was swimming too far to the left and the lead kayaker seemed to be heading in the direction of the buoy. I changed directions and took over the lead with my American teammates right on my feet – we were able to get together and lead out of the water as planned!

The four of us got out of transition and onto the bike together, but had separated about ½ -¾ of the way through the first of four bike laps. The course contained two hills, one that wasn’t too bad, and one that was both long and steep. The hills were separated by the 1.2km Juscelino Kubitschek Bridge. I hung on and worked well with the group through ¾ of the first lap, but got dropped on the descent on the steeper hill. I was able to work with another athlete for the next 2.5 laps of the bike. I was happy with how well I executed the skills we’ve been working on the last few weeks, even though I lost some time.

After a terrible T2, in which I struggled to figure out the bike rack (I had never seen one in that style before and couldn’t get my bike to stand up), I headed out on the most painful run of my life. The run course was four loops of roughly 2.5 km. We ran uphill the entire way out, gained 100+ feet of elevation in 1.25km, and then turned around and went back down the hill. At that point in the day, it was already very hot and humid. At every aid station on the course – two per lap – I poured water over myself, which resulted in some pretty bad blisters that started on the second lap. I tried to stay patient and kept passing people. Headed into the finish I was starting to catch another girl, but she had a finishing kick left and I didn’t. I ended up 5th, which I was very happy with and helped my team to the team title! The excitement kept on coming as we watched our teammate Kevin McDowell win the men’s race, and the men secure the team title! I was proud to help keep the women’s winning streak alive and be part of a team sweep!

Post-race we got to celebrate with a soccer game (Goias vs. Flamengos) at the National Stadium where several FIFA World Cup games will be held this summer. Although no goals were scored, there was some excitement in our section when a man threw a water bottle on the field after a bad call and was escorted away by the riot police. His fellow Flamengo fans completely threw him under the bus pointing him out and yelling what I can only assume are terrible Portuguese curse words at him. I have never witnessed anything like it!

Our group had a late evening flight the day after the race, which gave us the chance to explore. I loved seeing the beautiful, modernist architecture of the city, and trying all the Brazilian cuisine I could get my hands on. The experience was enhanced by the anniversary of the founding of Brasilia on Monday! On our bike ride that day, we discovered that a long stretch of the Brazilian highway was completely closed to traffic so people could exercise on the road! Imagine if this happened in the US! I had an absolute blast on this trip, and would love to see more of Brazil someday!