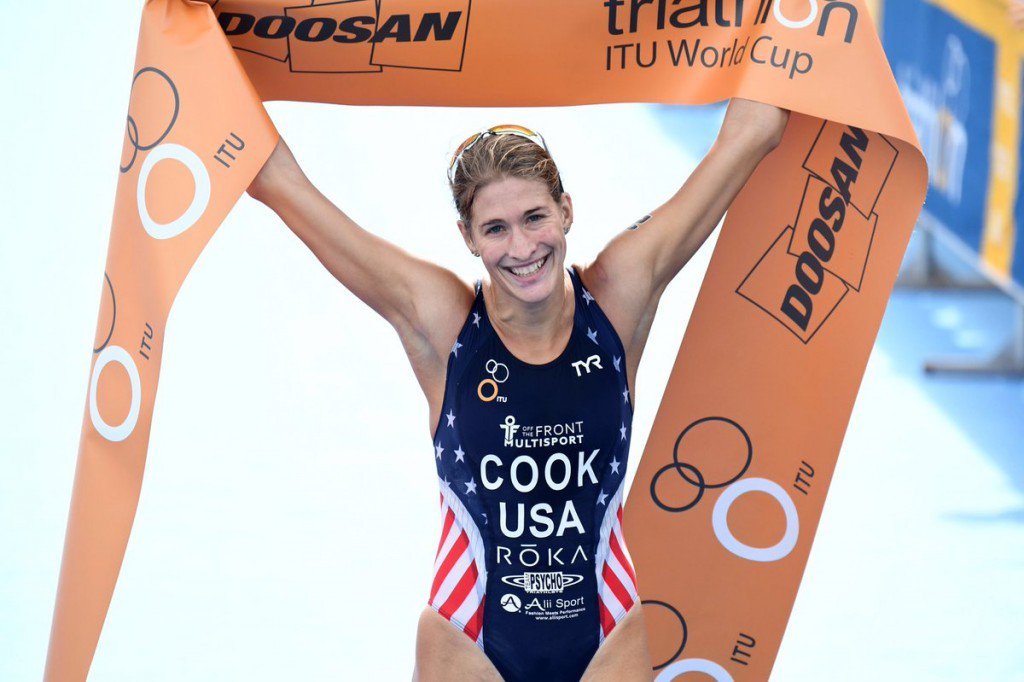 I loved racing in Tongyeong and I definitely plan to return. Tongyeong is a fishing village located about 90 minutes drive southwest of Busan. It’s just about as far south as you can go on mainland Korea. I loved the rolling green hills next to the sea and the track surface running path right along the water. Its a pretty small town and a little isolated, but a really nice place with a well organized race!

Race day in Tongyeong was a little chilly. We started at 9:30, which is on the early side for ITU racing. Much to my surprise, I opened up a gap on the swim! I haven’t had a gap on everyone in the swim since the days when I focused on conti cup racing! I forgot how nice it was to stay in control through transition and be able to get my feet in my bike shoes right away. The bike course in Tongyeong is hilly, but not very technical. I rode well through the few turns that there are and count my ride as a demonstration of progress. I quickly moved to the front of the run and found myself battling with Japan’s Ai Ueda for about 4km. Each run lap included a 200m very steep hill positioned about 1km before reentering transition. On the first lap I took over the lead on the hill. On the second lap, Ueda tried to make a move at the bottom and I was able to repass her and open up a gap. That last 1km was probably the hardest I’ve ever run 1km in my life! I was so relieved to cross the finish line and take my third ITU win of the 2016 season! 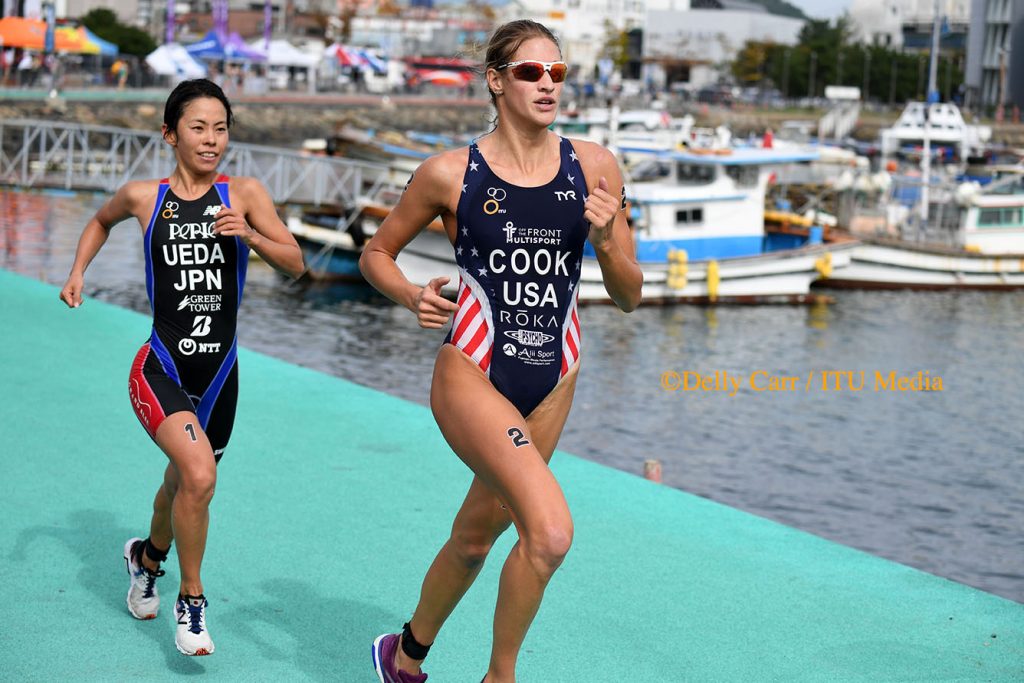 Battling before the final hill! 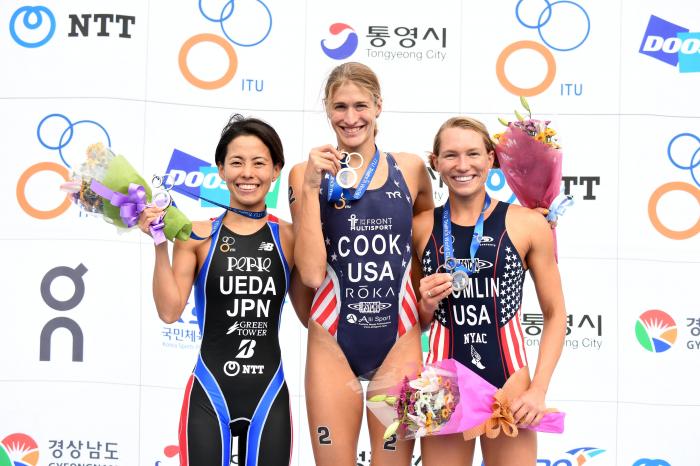 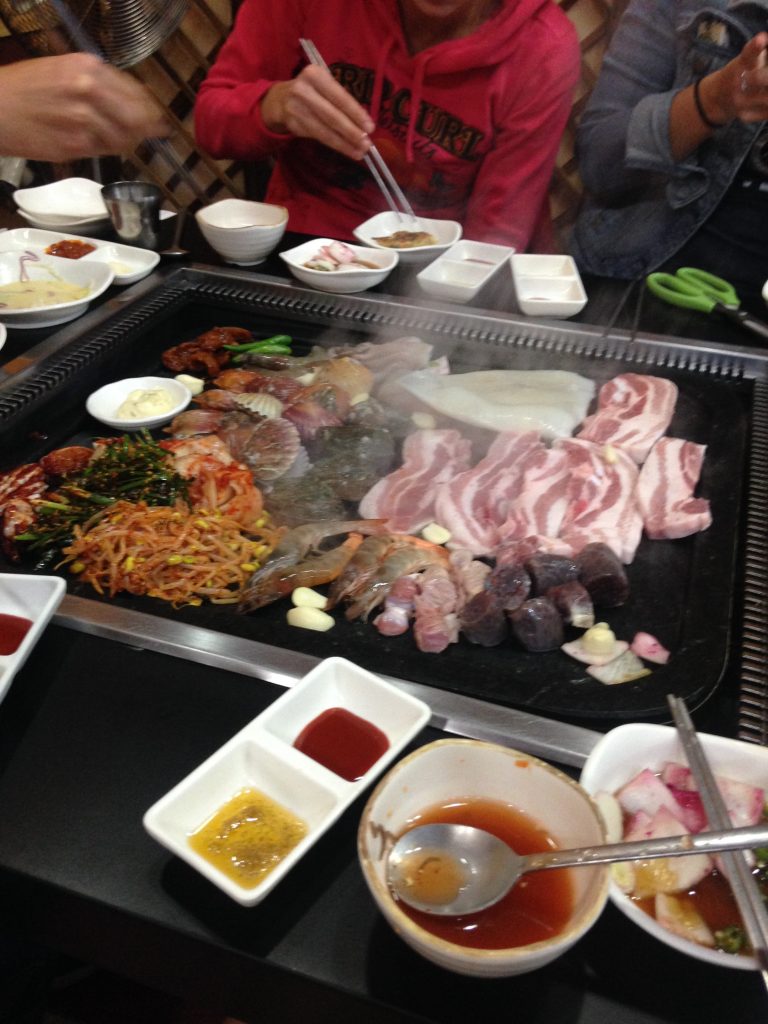 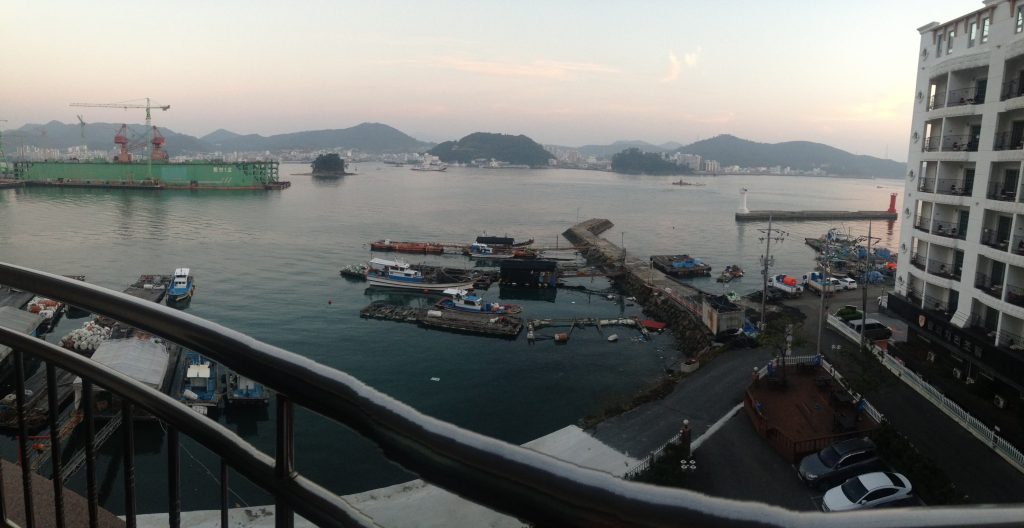 Prior to departing for Korea, squadmate Greg Billington and I were offered the opportunity to visit a school in Seoul and speak with middle and high schoolers about triathlon between the Tongyeong and Miyazaki races. We eagerly accepted, and got to visit the Yongsan International School. We participated in a Q&A session where we discussed everything from sleep and nutrition habits to bouncing back from failure and dealing with plateaus. After the Q&A, we headed outside to the track where Greg demonstrated bike mounts/dismounts and we ran a few laps with the kids before they participated in some relay races. We also hit up the school pool where I demonstrated a wetsuit removal before we worked on some triathlon-esque swimming with no lane lines and human turning buoys! I was really impressed with the kids at the school and loved having the opportunity to present to them and work with them. I hope more such “International Sports Diplomacy” visits become reality. These visits provide cross-cultural experiences for the athletes and connect us to the places we race and also introduce triathlon to the next generation –  a win-win!

Good guy Paulo was nice enough to give Greg and I a day off on the day of the school visit! As a result, we were able to do some sightseeing in Seoul. Seoul quickly became one of my favorite places that I’ve visited, if not my favorite. The city is a mix of old world, with palaces dating back to the 14th century, and new world, with a very modern transportation system and lots of skyscrapers. We got to visit some of the shopping districts, the famous Gyeongbokgung Palace, and Jogyesa Buddhist Temple.  We also ate some incredible food, including Ginseng Chicken Soup on the floor in a restaurant that Obama visited and Korean-Mexican fusion – you haven’t lived until you have tried kimchi fries! I was sad to leave Seoul but I’m also certain that I’ll be back someday! 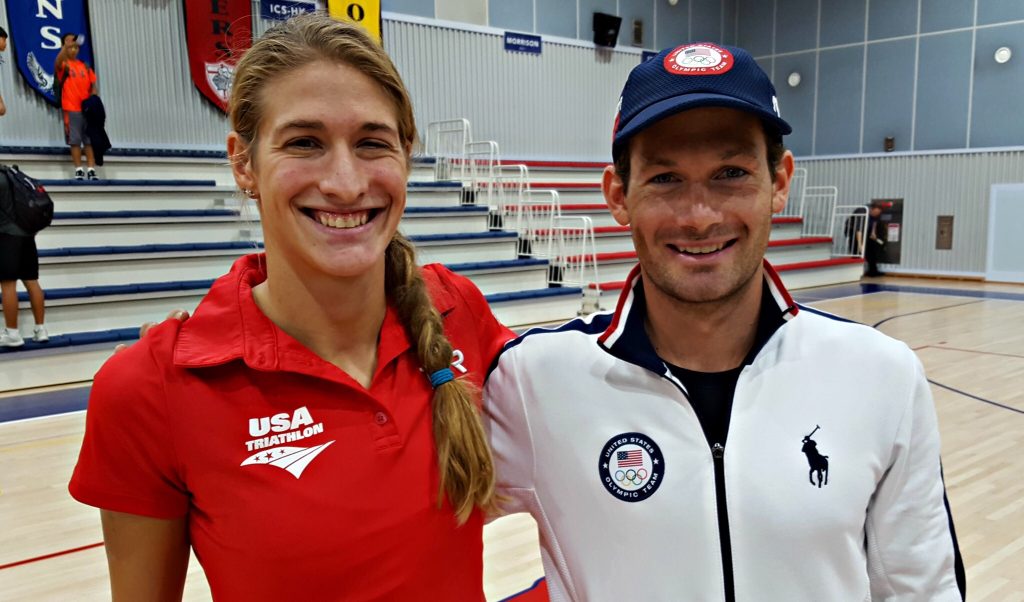 Excited to be presenting! 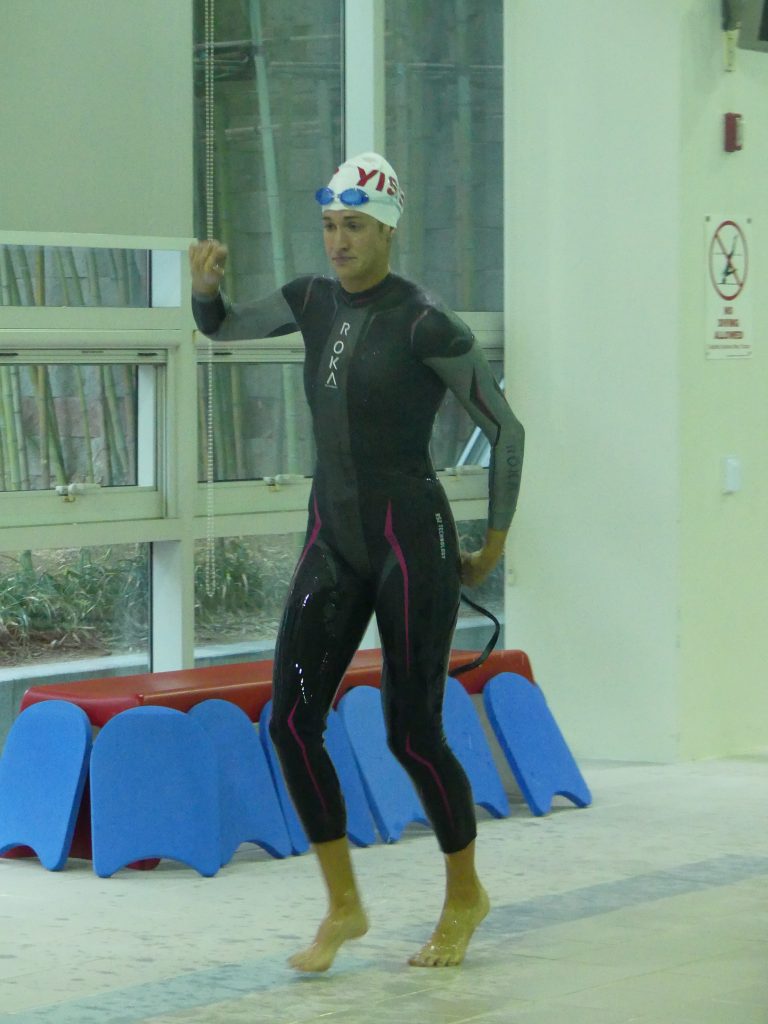 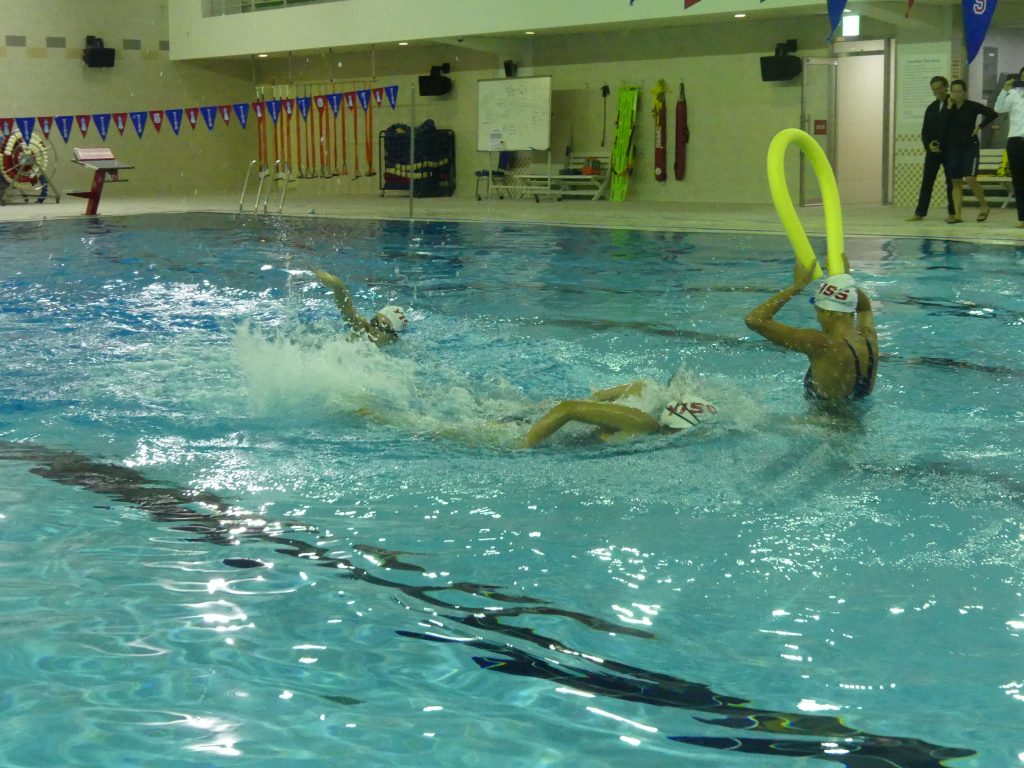 Acting as a human buoy 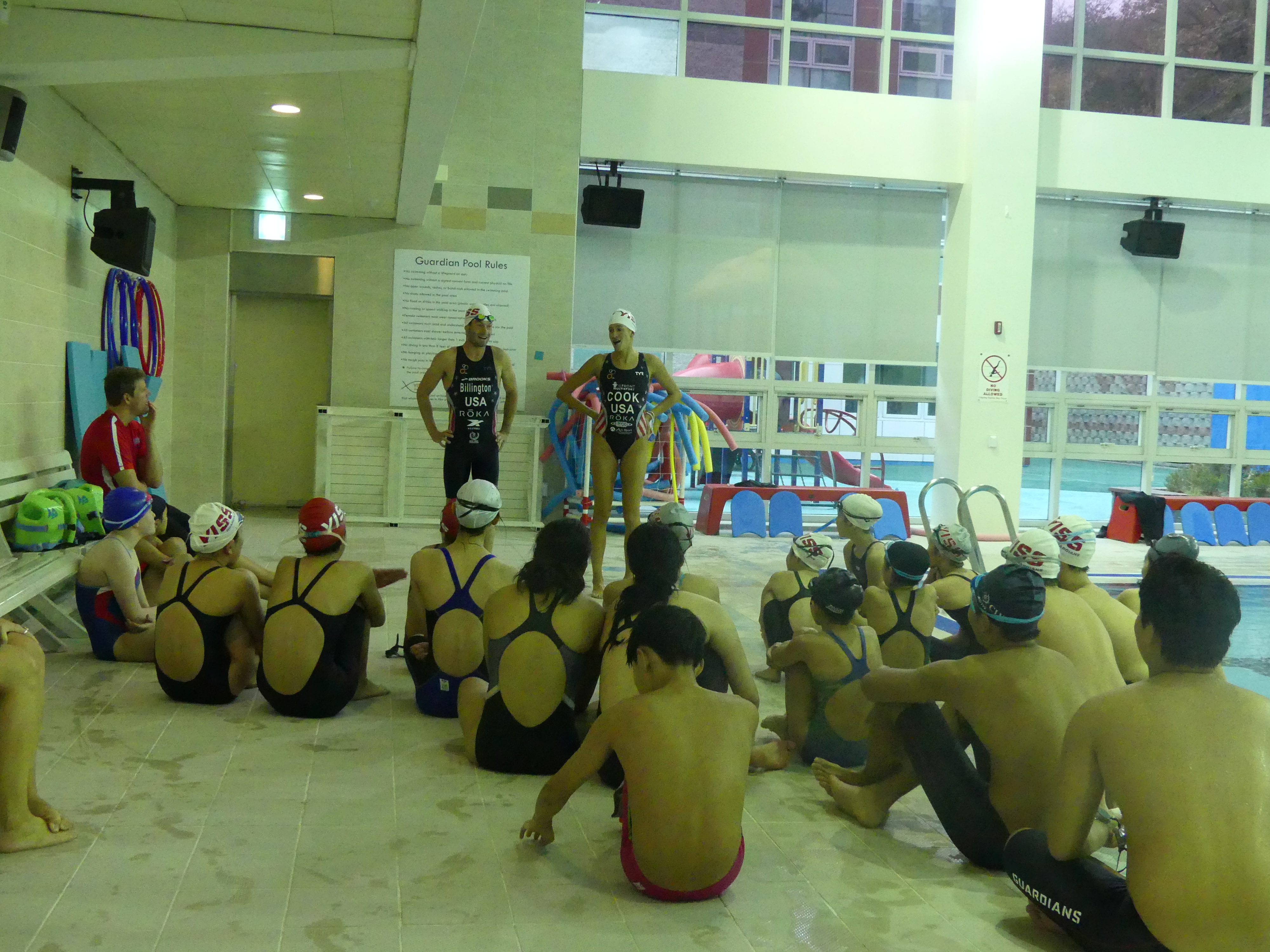 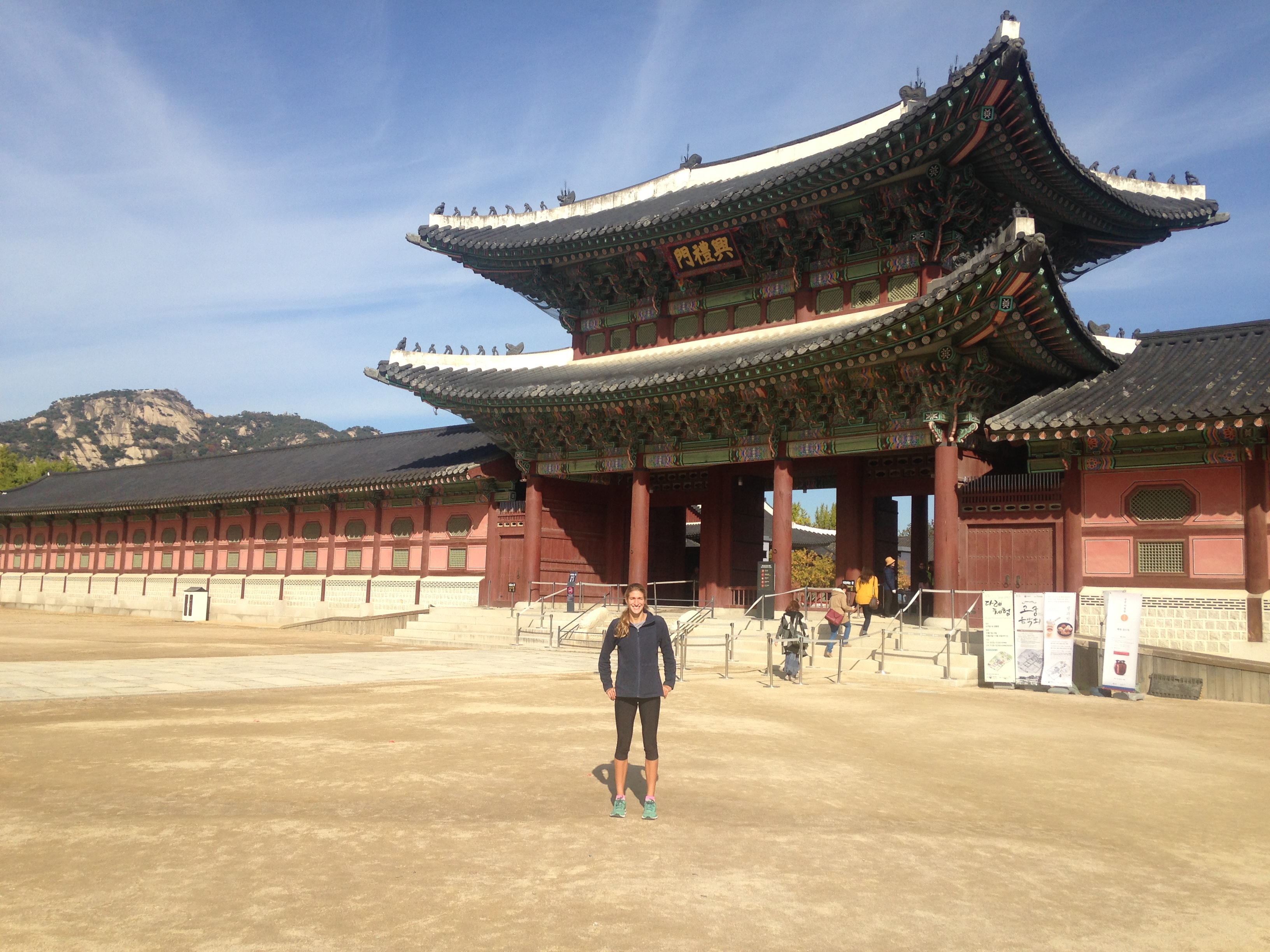 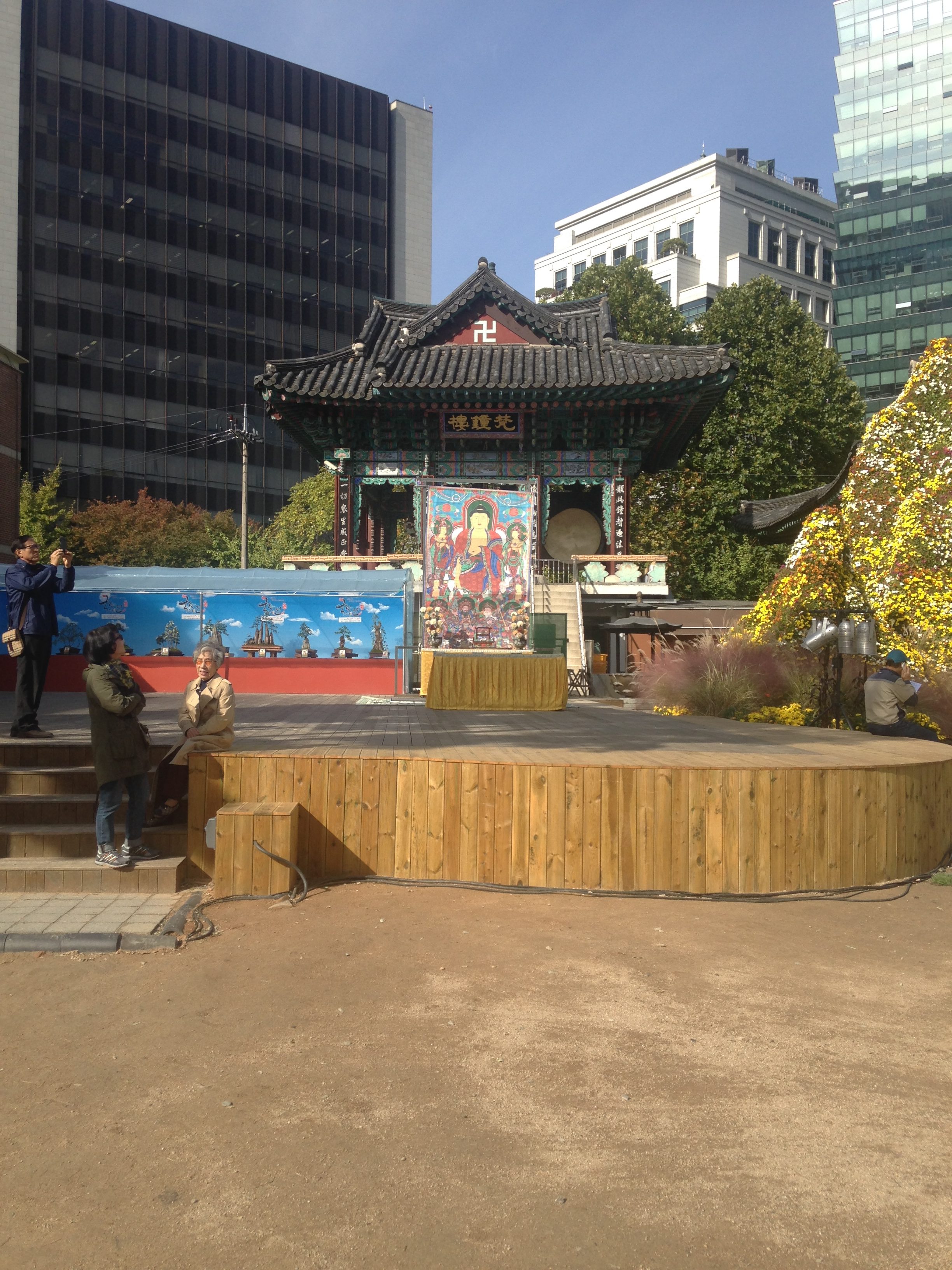 Miyazaki is a coastal city located on one of the southernmost islands of Japan. Miyazaki is home to some of the Japanese triathlon team’s training camps and many other sporting events and this was the first time the city has hosted a world cup. I love racing in Japan and it was nice to see a different area – the sea there is absolutely beautiful. Unfortunately, the race site and host hotels weren’t that close to the city, and taxis (and everything else) are extremely expensive, so we didn’t have the opportunity to see much other than the immediate area that we were in. Nonetheless, it was cool to experience a different part of Japan.

We had an in water start, which was weird. With the exception of the odd conti cup, ITU races are never in water starts. We determined before the race that the far right side would probably be fastest and I was able to pick the farthest right spot. Unfortunately, that side was also the first to enter the 22 degree C (low 70s F) water. 22 isn’t far above the wetsuit cutoff (20 degrees) and while swimming at race effort in 22 degrees is totally fine, it is not an ok temperature to be standing in the water, waiting for the start for what felt like 10 minutes – I was freezing and my teeth were chattering! On the other hand, the in water start suited me because it weeded out weaker swimmers immediately so I got clear water. I also have very long arms so I was already out further than most while still hanging on the starting rope waiting for the horn. I opened up a gap on the first lap. I didn’t see the point in extending my gap since it would just mean extra time riding solo, so I chilled on the second lap and tried to conserve energy for the rest of the race. I hadn’t done an olympic distance race since Yokohama in May and I was nervous about pacing. The bike course was a mix of a fast toll road and some slow, tight turns. I rode well through the tight turns and had my best T2 ever and I feel more confident in my ability to apply my skills in a race heading into 2017. The same major players from Tongyeong were also in Miyazaki and we had a group of three through the first 2 laps of the run. At 5km, Ueda made her move and I had no response. Our group quickly split apart with me in second. It was a battle just to hang on, but I was really happy to finish second. Miyazaki was my fourth world cup podium this year (and fifth ITU podium) and I was pleased to demonstrate some level of consistency through my late season races.

Thanks to everyone who made this season possible: my family, Ian, Paulo + The Triathlon Squad, my friends, USA Triathlon, fortynine Group, ROKA Sports, Off the Front Multisport, Team Psycho, and Alii Sport. I’m currently enjoying an off-season break and looking forward to resuming training for 2017 starting in December! Also – I was nominated for Team USA October Athlete of the Month! If you are interested, you can vote here http://awards.teamusa.org through November 7! 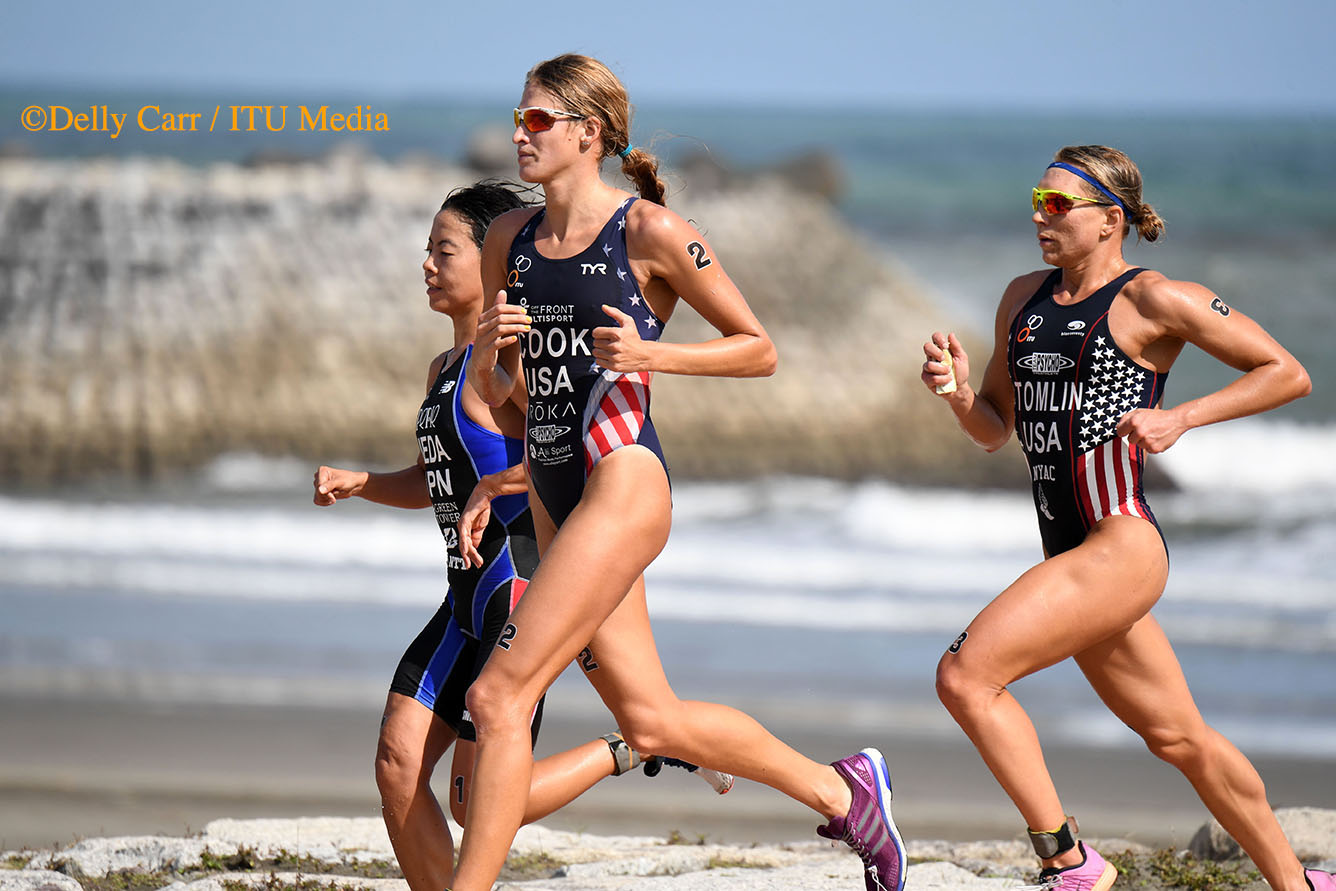 Already in too much pain to enjoy the beautiful coastline of Miyazaki! 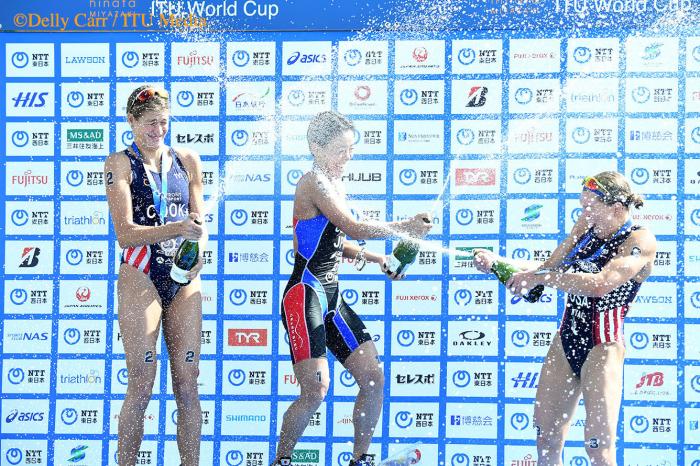